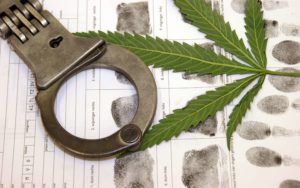 It is well-known that New Jersey law enforcement officers aggressively pursue marijuana offenders, regularly arresting and charging New Jersey residents and visitors for possession of even the smallest amounts of marijuana. Although many states are moving toward decriminalization and legalization of marijuana, New Jersey stands ardently opposed to marijuana under its current Marijuana Laws. In fact, according to a recent report issued by the New Jersey part of the American Civil Liberties Union, NJ state and local police officers are arresting more people than ever for marijuana possession. The ACLU investigation included a detailed analysis of the towns where the most marijuana arrests occurred. So, what did they find? Four of the top five towns for marijuana charges in the state are Jersey Shore beach locations, and three of these are located in Ocean County.

The aforementioned report, entitled “Unequal & Unfair: NJ’s War on Marijuana Users,” used data from across the state of New Jersey in 2013. The results were striking: NJ law enforcement officers arrested 24,067 people for marijuana possession in a single year, and executed 280,000 arrests for possession of marijuana between 2010 and 2013. The arrest data showed that marijuana arrests occurred far more often in some towns than others when calculated per 100,000 people. Among the top 50 towns, six are located in Ocean County and three Ocean County towns were included in the top five for per capita marijuana arrests. Let’s take a closer look at the numbers.

In addition, the three towns with the highest per capita arrest rate for possession of marijuana in Ocean County in the three-year period between 2010 and 2013 were: Ship Bottom, with 3,405.36 arrests; Seaside Heights, where 2,444.96 arrests occurred; and Point Pleasant Beach, with a total of 1,340.88.

Arrested for Marijuana at the Jersey Shore?

Clearly marijuana charges at the Jersey Shore are extraordinarily common. Unfortunately, the prevalence of marijuana arrests does not minimize the seriousness of these charges. In fact, possession of marijuana under 50 grams is a disorderly persons offense outlined in section N.J.S.A. 2C:35-10(a)(4) of the New Jersey Criminal Code. If you are convicted of possessing under 50 grams of weed, you may be sentenced to serve up to 6 months in the county jail. Additional penalties include a fine of up to $1,000 and suspension of your driver’s license for six months. Lastly, if you are found guilty of marijuana possession, this conviction will appear on your criminal record, which can become a significant impediment when you pursue future employment and education opportunities.

Notably, if you are found in possession of more than 50 grams of marijuana, you may be charged with a fourth degree crime, in violation of N.J.S.A. 2C:35-10(a)(3). This is technically a felony in New Jersey, so your case will be adjudicated in Ocean County Superior Court in Toms River. Since this is an indictable offense, a conviction may result in a sentence to serve up to 18 months in New Jersey State Prison, as well as a maximum fine of $25,000, a six-month driver’s license suspension, and a felony conviction on your criminal record.

If you have been arrested for possession of marijuana or possession of marijuana with intent to distribute in Ocean County, it is absolutely imperative to understand and protect your legal rights. At The Law Offices of Proetta & Oliver, our criminal defense attorneys have successfully represented thousands of clients charged with marijuana offenses in Seaside Park, Point Pleasant, Beach Haven, Ship Bottom, Seaside Heights, and throughout Ocean County. To discuss your specific case, contact our offices in Toms River at (848) 238-2100 for a free consultation with an Ocean County marijuana defense lawyer.

For additional information pertaining to this issue, view the following article: N.J. Towns With Most Marijuana Busts: Is Your Community Here?