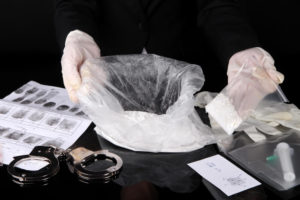 Possession of a controlled dangerous substance is a crime in the State of New Jersey, no matter whether you possess it in the northern part of the state or in the southern locations, such as Berkeley Township in beachside Ocean County. People in Berkeley,  including those in Bayville and other communities within the township, end up charged with drug possession due to run-ins with local law enforcement on their way to the beach, in their car while traveling along Route 9, or stopped with drugs in their pocket, purse, or backpack and even in their undergarments. The fact is that the law does not differentiate by the town you were in when you were arrested for possessing controlled dangerous substances (CDS), nor does it account for where the drugs were stored. This is because the sentencing scheme for possession of a controlled dangerous substance is the same for anyone charged with a violation under N.J.S.A. 2C:35-10, regardless of the unique facts of the case. More importantly, for drug crimes, you can be punished just as harshly for possessing a quality substance as you can for possessing a drug that has been diluted or altered in some way with another substance. What can make a difference in the case is the attorney that you hire.

Our attorneys at the law office Proetta & Oliver have aggressively fought and won cases involving possession of CDS in Berkeley Township Municipal Court and Ocean County Superior Court. We will apply our knowledge and criminal defense experience to your case as well. While we cannot promise what the outcome will be, we can promise to defend your rights and your interests every step of the way. Contact us at (848) 238-2100 if you have any questions at all about a Berkeley NJ drug possession charge and would like to speak with an attorney free of charge.

The law makes it illegal to possess any controlled dangerous substance (CDS) that is banned altogether, or can only be possessed with a valid prescription. Possessing CDS is a crime and the level of the offense turns on the nature of the substance itself, as well as the total weight. Many substances tested by the laboratories are not pure and often contain adulterants of some sort. Mixing in legal substances with illegal CDS does not make you any less susceptible to a criminal charge. In other words, marijuana that has been combined with a natural and leafy legal substance like oregano is still considered marijuana. So if you are heading to nearby Seaside Park or Point Pleasant and you want your weed to last for your buddies or you want to keep the better stuff for yourself, you will be charged with a crime if caught. The degree of the offense depends on the weight of the drugs and what kind of substance leads to the charges.

Charged with a Fourth Degree Crime for Drug Possession in Berkeley

Possessing less than 50 grams of marijuana is a disorderly persons offense, while possessing greater than that amount is a fourth degree felony crime. The fourth degree charge can be proven by the state even if the amount of the real marijuana is less than 50 grams and the additive weighs more, tipping the scales beyond the 50 grams. The lab is not required to parcel out the substances and weigh them individually, as it can be an impossible task. Similarly, possession of synthetic marijuana is a fourth degree offense but can rise to a third degree crime if the weight is greater than one-half ounce. Synthetic marijuana is commonly cut with unknown agents that can add to the gross weight and increase the level of the crime. The presence of THC in the product is what counts.

Not all fourth degree drug crimes include diluted substances and many are possessed in their original state. You may be charged with fourth degree possession crimes for substances that stand on their own as well. For example, fourth degree offenses encompass substances such as less than 5 grams of hash, in addition to prescription legend drugs possessed in fewer than 4 doses, and Schedule V controlled dangerous substance (low doses of codeine, opium, dihydrocodeine,  ethylmorphine, and diphenoxylate). Schedule V substances are not considered as dangerous or addictive as those scheduled in I,II,III, or IV and have lighter penalties than third degree crimes.

Just as fourth degree substances can be mixed in with additives, so too can any other drugs. Sometimes the drugs are mixed with other controlled dangerous substances while some are cut with legal substances. For instance, possession of any amount of heroin is a third degree crime.  The drug is often mixed in with fentanyl, a narcotic that can only be administered by a physician.  This substance is illegal to possess by anyone other than a treating doctor. Mixing heroin and fentanyl can be deadly. Accordingly, the police will charge the possessor with possession of CDS in the third degree for either substance. The lab will then confirm the nature and weight of the substance. Heroin possessed in less than a half-ounce is a third degree crime.

Cocaine is another substance that can be cut with additives but is nonetheless a third degree crime if you possess any amount up to a half ounce. Other drugs allowing for a third degree crimes of possession are: steroids, ketamine, LSD, Ecstasy, PCP, Methamphetamine, psychedelic mushrooms, and certain amounts of prescriptions including adderall, vicodin, percocet, darvocet, oxycodone, klonopin, methadone, suboxone, and xanax.

Sometimes, your charge may not be a felony crime at all and may be considered a criminal misdemeanor known as a disorderly persons offense. Possessing less than 50 grams of marijuana is a dp offense, as is possessing prescription pills in four or fewer doses or possessing the pills in a container that was not the original prescription bottle. Having drug paraphernalia can also lead to disorderly persons charges.

Do you go to Jail for Drug Possession in Berkeley NJ?

Possessing drugs anywhere in Berkeley Township mandates your appearance in court.  The court and the punishments depends on the type and amount of the drug possessed. For indictable third and fourth degree crimes, you can be arrested, fingerprinted, and even held in jail until your first appearance in Ocean County Superior Court. Though motions for detention are uncommon in straight drug possession cases, they can happen when the defendant has a lengthy record and a history of failing to appear in court. Your attorney can obtain and review evidence, file motions, negotiate, and make legal arguments on your behalf. If convicted, indictable crimes allow for state prison terms to be imposed as well as other penalties. For fourth degree crimes, the fines range from $10,000 to $25,000, and the sentence extends up to 18 months in New Jersey State Prison.  For a third degree drug possession crime, the court can require you to pay a fine as much as $35,000 in addition to imprisoning you for between 3 and 5. It should be noted, however, that there is a presumption of non-incarceration for third and fourth degree offenses so many other options may be achievable if this is your first offense.

The punishment and court is different for disorderly persons offenses. DP offenses are heard in Berkeley Township Municipal Court where you cannot be sent to state prison. Nevertheless, you can be sent to the Ocean County Jail for 6 months and be ordered to pay $1,000 in fines. The permissible fines are in addition to mandatory penalties. For example, every drug offense requires the court to assess a drug enforcement demand reduction penalty. These are referred to as DEDR penalties and are as follows: $1000 for  a third degree, $750 for a fourth degree, and $500 for a disorderly persons offense. Aside from these consequences, you could lose your license for 6 to 24 months and be ordered to undergo substance abuse treatment, which can obviously be hard to do.

Can I get an expungement for Possession of CDS in Berkeley Township?

Considering that the offenses will be on your criminal record, often making finding a good job difficult to come by, you may want to consider getting your record expunged. Depending on the situation, you may become eligible for an expungement immediately, after 6 months, or after several years. Expungements are available only if you meet certain conditions, so talking to a lawyer about your specific expungement eligibility is important when you want the most accurate information possible.

Arrested for Possessing Drugs in Berkeley NJ, Now What?

Have you been charged with drug possession in Berkeley Township? The law office of Proetta & Oliver is prepared to help. We know the hardships that you face when charged with a drug crime, even seemingly minimal offenses like Possession of CDS. We make no judgments about you, your criminal charges, or what happened. Our only goal is to defend you in every way possible. Call (848) 238-2100 if you are in need of assistance and a free consultation. A member of our defense team is standing by.