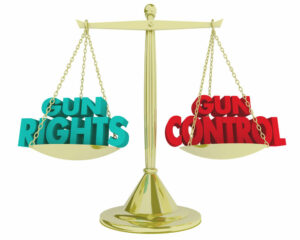 The right to bear arms is protected by the Second Amendment of the U.S. Constitution, but there are limitations and restrictions on this right in certain circumstances. One such example is extreme risk protective orders in New Jersey, referred to in the public discourse as red flag laws. In 2018, New Jersey lawmakers made the state’s already-tough gun laws even tougher by passing the Extreme Risk Protective Order Act, or ERPO Act. This law allows certain individuals to petition the NJ courts to prohibit another individual from possessing or purchasing a firearm. Generally speaking, the justification for this prohibition is that the person would pose a safety risk to themselves or others if they were allowed to carry a firearm, with the idea being that anyone who is already considered “dangerous” might be more likely to use a gun that they have access to. What does it mean for you if you have been served with a temporary ERPO? And what can you do to challenge the protective order and protect your right to lawfully possess a firearm? Keep reading to find out.

What is an Extreme Risk Protection Order in New Jersey?

The Extreme Risk Protective Order Act of 2018 is codified in N.J.S.A. 2C:58-20 through N.J.S.A. 2C:58-32. The statute provides definitions of key terms and sets forth the guidelines that courts must follow when deciding whether to issue an extreme risk protective order (ERPO). The statute defines “firearms” broadly in accordance with existing New Jersey gun laws to include handguns, shotguns, rifles, machine guns, and other projectile weapons.

Who Can File a Temporary ERPO in NJ?

What Determines Whether a Temporary Extreme Risk Protective Order is Issued?

Once someone has requested a temporary extreme risk protective order, the petition will go before a judge in the Superior Court located in the county where you reside. The judge will then evaluate the evidence and consider a number of different factors that are set forth in N.J.S.A. 2C:58-23 of the New Jersey Criminal Code:

In addition to these factors stipulated in the criminal statute, the New Jersey Office of the Attorney General also issued an official Directive that provided guidelines with extra factors that judges should take into consideration during ERPO hearings. These include the following:

Importantly, you are not allowed to participate in the temporary extreme risk protective order hearing. This means that you will not be able to present your side of the story or contest the arguments made by the prosecutor. The judge will weigh all of the above factors and make a determination about whether to issue the temporary ERPO against you based entirely on the evidence presented by the prosecution. Your best opportunity to make your case will come at the final ERPO hearing, where it will be to your advantage to have legal representation assisting you.

What Are the Consequences of a Final Extreme Risk Protection Order NJ?

Getting a final extreme risk protective order is more difficult for the prosecution than getting a temporary extreme risk protective order. That’s because you will be allowed to make arguments in your own defense before a final order is issued by the Superior Court judge. So, what does a final order mean? First, it’s important to recognize that the consequences of losing the final ERPO hearing are severe: you will no longer be allowed to purchase, own, or possess any firearms going forward. Additionally, you will be barred from ever obtaining a firearms purchaser ID card or handgun carry permit in New Jersey, as well as any firearms ammunition.

While these gun rights restrictions also apply after a temporary ERPO is issued, that order won’t last past the initial 10-day period unless you actually lose the final hearing. Beyond that, the issuance of a final extreme risk protective order will mean that any firearms or other weapons that were seized by law enforcement in connection with the temporary ERPO won’t be returned to you since you will be ineligible to possess them.

Can a Final ERPO be Terminated once Issued in New Jersey?

A qualified criminal defense attorney may also be able to help you regain your firearm ownership rights even if you do lose the final extreme protection order hearing. A final extreme risk protective order isn’t always necessarily final. In some instances, it’s possible to get the order vacated. For example, if the person who initially petitioned for the ERPO later goes to the court and asks for the order to be lifted, the judge may give that request significant weight – especially if the order was initially granted due to safety concerns for the petitioner. Alternatively, the court may dismiss the final ERPO if the respondent can show that they no longer pose a significant danger to the physical safety and wellbeing of themselves or anyone else. Once the ERPO is terminated, you will be allowed to request that authorities return any firearms they seized from you.

Anyone who is served with a temporary ERPO needs to speak with an experienced New Jersey gun rights defense attorney as soon as possible. You will have just 10 days to get ready for the final ERPO hearing, and that hearing will determine whether you will ever be allowed to possess a firearm in New Jersey. Moreover, you will not be able to recover any weapons that were confiscated by law enforcement if you lose the final extreme risk protective order hearing. The bottom line is that your gun rights are at stake, so you are going to want the best possible arguments raised on your behalf. If you are facing the loss of your gun rights in connection with an extreme risk protective order in Ocean County, NJ, contact our ERPO defense lawyers for help right away. We have vast experience defending individuals served with extreme risk protection orders in towns like Toms River, Point Pleasant, Jackson, Manchester, Lacey, Brick, and other Jersey Shore communities. Contact our office 24/7 for a free initial consultation regarding your ERPO case. Defense help and representation is available to you by calling (848) 238-2100.