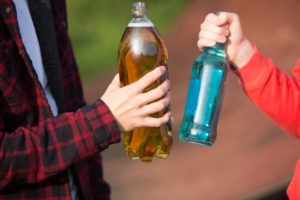 Underage drinking is a tremendous problem throughout the United States, and New Jersey has not escaped the effects of this potentially deadly issue. As a young person or the parent of a teenager, it is important to understand the prevalence of underage drinking both nationally and in NJ, as well as the common charges linked to underage drinking in New Jersey. If you have been charged with underage alcohol possession, consumption, possession of a fake ID, or underage DUI at the Jersey Shore, you should speak with a criminal defense lawyer with experience defending these cases. Our Ocean County criminal attorneys at Proetta & Oliver have defended countless young people charged with underage alcohol offenses. With centrally located offices in Point Pleasant, we regularly appear in local courts in Toms River, Long Beach Township, Manchester, Lacey, Barnegat, Berkeley Towns, and other areas. If you would like to discuss your particular case with a lawyer at our firm, contact us at (848) 238-2100 today.

How Common is Underage Drinking at the Jersey Shore?

The Centers for Disease Control recently published a fact sheet outlining a number of sobering statistics about underage drinking. Drinking to excess kills over 4,300 underage drinkers annually. The personal toll that these deaths take on families is inestimable. The cost to the US economy has exceeded $24 billion since 2010. Shockingly, even though people under 21 are not permitted to drink, underage drinkers consume a full 11% of all alcohol consumed in the United States. The CDC estimates that over ninety (90) percent of this alcohol is consumed through binge drinking. Underage drinking has led to over a hundred thousand emergency room visits for conditions linked to alcohol since 2013.

Minor in Possession of Alcohol & Illegal Purchase of Liquor in Mantaloking

New Jersey prohibits underage possession and consumption of alcohol under any and all circumstances. Section 2C:33-15 states that a minor can be convicted of a disorderly persons offense if that minor knowingly possesses an alcoholic beverage without legal authority (or knowingly consumes an alcoholic beverage) in any school, public place, or motor vehicle. Another NJ law, statute 33:1-81, provides that a minor can be convicted of a separate disorderly persons offense if they purchase or attempt to purchase alcohol or misrepresent their age to purchase alcohol, among other violations. Local towns often have municipal ordinances that can further prohibit underage drinking and related offenses.

The penalties for these offenses can be severe. Being convicted of an underage alcohol charge in New Jersey can result in up to 6 months in jail, fines ranging from $250-$1000, postponement or suspension of the minor’s ability to drive, and a requirement that the minor attend an alcohol and/or substance abuse treatment program. Arrest and conviction for an underage drinking offense can also result in a criminal record that may affect employment and college prospects.

Charged with Underage DUI in Lavallette

If a minor consumes alcohol and then operates a motor vehicle in New Jersey, they can be convicted of driving under the influence. New Jersey is a zero-tolerance state when it comes to underage DUI, meaning if a minor drives a car with even a .01 BAC, they can be convicted of a DWI. The higher the BAC of a minor driving the motor vehicle, the more severe the penalties can be for this offense. Consequences of underage DWI can include a loss of driving privileges for months, required installation of an ignition interlock device, hundreds of dollars of fines, community service for 15-30 or more days, and the consequences get even worse for elevated BACs.

A minor’s conviction for any alcohol related offense can have severe consequences on later employment and educational prospects, over and above the legal penalties discussed above. If you are or are the parent of a minor who has been charged with underage drinking, drunk driving, or purchasing liquor under the age of 21, contact the Jersey Shore defense lawyers at our firm to discuss your options. We are available now to provide you with a free consultation.