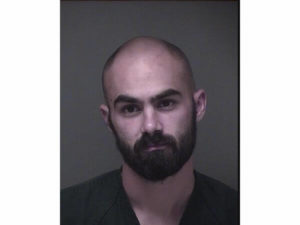 A Beachwood man is now facing numerous criminal charges, including those for burglary, arson, and auto theft, after allegedly breaking into several homes in Toms River, as well as stealing a car and subsequently setting it on fire in South Toms River.

According to officials from the Ocean County Prosecutor’s Office, 25-year-old Beachwood resident Jesse James Sauer is accused of committing two burglaries in the Cranmoor section of Toms River on July 7th, during which he allegedly stole cash and other property. Just three days later, authorities say Sauer stole a 2003 Ford F350 truck from a residence in the Money Island section of Toms River.

Shortly thereafter, members of the Beachwood Fire Department were notified about smoke coming from the woods in the vicinity of Oak Street and Briar Way. When they responded to the scene, they discovered the burning pickup truck, which was deemed suspicious by officials from the Ocean County Prosecutor’s Office, Ocean County Sheriff’s Department CSI, Ocean County Fire Marshall, South Toms River, Toms River, and Beachwood Police Departments. Following an investigation, it was determined that the fire was arson.

When law enforcement officials executed a search warrant at Sauer’s residence in Beachwood, they reportedly found stolen property from the Toms River burglaries. Sauer has now been charged with multiple counts of burglary and theft of a motor vehicle out of Toms River. He is also facing charges in South Toms River for aggravated arson, hindering and destruction of evidence, as well as assault charges in connection with a separate incident that allegedly occurred in Berkeley Towsnhip.

Sauer, who is currently being held in the Ocean County Jail, is exposed to severe penalties as a result of these charges. For example, a typical burglary offense in New Jersey is considered a third degree crime, punishable by up to 5 years in state prison. According to N.J.S.A. 2C:18-2, which governs burglary, this offense is elevated to a second degree crime if the person injures, attempts to injure, or threatens to injure anyone; or is armed with what appears to be a weapon during the commission of the offense. A second degree burglary crime may result in up to 10 years of incarceration.

In addition, aggravated arson in New Jersey is classified as a second degree crime in violation of N.J.S.A. 2C:17-1. Not only is aggravated arson punishable by between 5 and 10 years in New Jersey State Prison, but it is also subject to the provisions of New Jersey’s No Early Release Act, which requires the person convicted to serve 85 percent of the sentence imposed before becoming eligible for parole.

For additional information pertaining to this case, access the following: