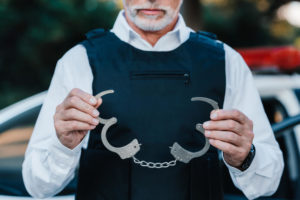 Lacey Township, also referred to as Forked River, spans 83.256 square miles along Route 9 and the Garden State Parkway. Anyone from New Jersey knows that the Parkway is the main roadway used by those desirous of trekking “down” the shore. As such, Lacey is often frequented by beachgoers or those needing access to the waterways and marinas. However, a great day in Lacey can turn into a legal nightmare if you are arrested for a crime, or worse, charged with a crime plus resisting arrest.

Despite being a great place to live or visit, Lacey, New Jersey has its own bouts with crime and arrests. Even a cursory review of the police blotter reveals countless arrests for DUI, drug possession, burglaries and theft in Lacey. While a large portion of these arrests appear to be for new crimes, a significant amount of arrests are for warrants that were previously issued for other cases. Some of these cases are undoubtedly for municipal court cases in which someone has failed to appear or court and a warrant was issued. For others, a warrant may have been issued for something as low-level as not paying court fees or ticket costs. Regardless of how the case arises, resisting arrest is often a charge brought in addition to criminal charges for another offense. The problem is, how you handle your arrest can actually land you in bigger trouble and facing even more consequences that you would be for the original crime alone. If you have been charged with resisting arrest in connection with a Lacey Township criminal case, contact our experienced team of local attorneys for answers and advisement. You can reach us anytime by contacting us online or calling (848) 238-2100 for a free consultation with a Lacey criminal defense lawyer who can help.

Resisting arrest is outlined in N.J.S.A. 2C:29-2. The law specifically forbids you from preventing or attempting to prevent your own arrest. In accordance with N.J.S.A. 2C:29-2, failing to stop and allow the arrest is a chargeable offense. This means that you cannot hide, run, pull away, flee, ignore, drive off, fail to stop, or do anything that would stop an officer from arresting you. No matter what reason an officer has or effectuating an arrest, you must yield to the officer’s instructions and allow him to arrest you. In Lacey or anywhere else in New Jersey for that matter, failure to heed instructions in the course of being arrested may result in a charge of resisting arrest. This is true even if you are wrongfully arrested.

Many people are under the mistaken impression that they cannot be charged with resisting arrest if the officer placed them under arrest falsely. This is not only untrue, but in fact, if you refuse to be arrested and resist, you can be placed in jail without bail pending trial. All that the law requires is that you are aware that the person arresting you is an officer and that you were under arrest or were told to stop. Eluding (failing to stop) or fleeing is not commonly understood when discussing resisting arrest, but it is a related offense nonetheless.

How Resisting Arrest or Eluding Charges can Happen in Lacey

In Lacey Township, whether you are taking your boat out of Lanoka Harbor or Southwind’s Marina, you could be charged with resisting arrest/eluding if you receive a signal to stop and fail to do so. You must obey the same rules on the water as required on land or in a car. The statute notes that anyone “on the waters of this State, anyone who knowingly flees or attempts to elude any police or law enforcement officer after having received any signal from such officer to bring the vehicle or vessel to a full stop commits a crime.” If the state establishes and proves that you received a signal to stop but failed to do so, you can be convicted. So, if you are enjoying the summer’s breeze, warmth of the sun, and having a few drinks to celebrate the day’s end and find yourself confronted with an officer’s instruction to stop, it is highly advisable to listen and stop. Avoiding a DUI or arrest by eluding an officer is not worth the consequences that can befall you if convicted.

What is the Penalty for a Lacey Resisting Arrest Offense?

Of course, not all cases involving resisting arrest are indictable crimes punishable by state prison time. Often, resisting arrest is charged as a disorderly persons offense. These lower-level offenses will not permit the judge to sentence you to state prison, but you could be forced to reside in the Ocean County Jail for up to 180 days. A disorderly persons offense of resisting arrest can be charged when it is alleged that you “purposely prevented” or attempted “to prevent a law enforcement officer from effecting an arrest.” For instance, if an officer from the Lacey Township police stops and questions someone and discovers that they have a warrant, the person must permit the officer to arrest them. If the officer says “put your hands behind your back you are under arrest,” you must do so. If you hide or try to walk away, you may be charged with a disorderly persons offense for resisting arrest and forced to answer the complaint in Lacey Township Municipal Court, located at 818 West Lacey Road, Forked River.

Additionally, if convicted of any of the above, you will be forced to pay certain mandatory penalties. You can also be required to pay tens of thousands of dollars in discretionary fines. A conviction or plea to any resisting arrest offense authorizes the judge to financially penalize you as follows:

Also, if convicted of such an offense as eluding in the case of a boat or car, the court may suspend your license for two years. As if finding employment with a record isn’t hard enough, trying to get to work without a license can feel next to impossible.

While you may feel lost or without recourse when facing resisting arrest charges, there are solutions. No matter what the degree of the resisting arrest charges you are facing in Lacey, New Jersey, we can help you understand and challenge the case against you. Our attorneys will meet with the prosecutor, gather the information and argue for dismissal, downgrade, or an outcome that is more suitable to you. If the case cannot be resolved, a trial will take place in which the state will attempt to prove you guilty beyond a reasonable doubt. We will examine all of the available evidence, argue against the validity of the charges, and present all possible defenses in an effort to get your charges dismissed. Contact our office today at (848) 238-2100 for a free consultation with an experienced Lacey criminal defense lawyer near you.