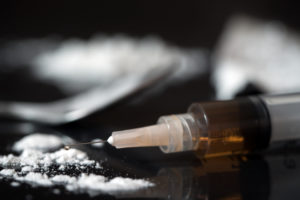 Heroin has become increasingly prevalent throughout New Jersey and especially in Ocean County. In fact, Ocean County has one of the highest rates of heroin overdoses and heroin-related deaths in the state year over year. A majority of the law enforcement and legal community agree that the increase is directly attributable to the easy accessibility of highly addictive prescription opiates such as Oxycontin and Vicodin. Sometimes individuals who have been prescribed these prescription medications become addicted. As a result, when the prescription runs out, these individuals will look for ways to fill their need. This is where heroin comes into the picture. In order to meet the heroin explosion head-on, courts and law enforcement have taken a tough stance against these charges on both the state and federal level. If you are convicted of heroin possession in New Jersey, you will be subject to incarceration in state prison because it is an indictable offense.

Attorney William A. Proetta largely dedicates his practice to defending individuals for criminal and municipal court drug charges and we have represented clients charged with heroin possession and distribution throughout Ocean County and New Jersey. If you have been charged with possession of heroin in Toms River, Jackson, Lakewood, Stafford, Little Egg Harbor, Seaside Heights, Brick, or Point Pleasant Beach it is important that you retain an experienced criminal lawyer. If you would like to speak with an Ocean County heroin defense attorney free of charge please contact our Toms River office at (848) 238-2100.

Simple possession of heroin is a violation of section N.J.S.A. 2C:35-10(a)(1), which is provided in pertinent part below for your convenience.

a. It is unlawful for any person, knowingly or purposely, to obtain, or to possess, actually or constructively, a controlled dangerous substance or controlled substance analog, unless the substance was obtained directly, or pursuant to a valid prescription or order form from a practitioner, while acting in the course of his professional practice, or except as otherwise authorized by P.L.1970, c.226. Any person who violates this section with respect to:

(1) A controlled dangerous substance, or its analog, classified in Schedule I, II, III or IV other than those specifically covered in this section, is guilty of a crime of the third degree except that, notwithstanding the provisions of subsection b. of N.J.S.A. 2C:43-3, a fine of up to $ 35,000.00 may be imposed.

Penalties for Heroin Charges in NJ

Heroin is recognized as having a high potential for abuse and no current accepted use in medical treatment in the United States. As such, it is classified as a Schedule I Controlled Dangerous Substance in New Jersey. The statute above explains that having any amount of heroin in your possession is considered a third degree crime under 2c:35-10. This is an indictable offense (also known as a felony) which will be handled in the Superior Court in the county where the arrest took place. So, if you’re arrested for heroin in Brick Township, you will be required to appear in Ocean County Superior Court in Toms River, NJ to face the charges. Penalties for heroin possession in New Jersey include a prison sentence ranging from 3 to 5 years, a fine of up to $35,000, a 6-month driver’s license suspension, and a felony on your criminal record if convicted. Other potential punishments for heroin include court-order supervision, drug testing, community service, probation, and substance abuse treatment.

Depending on the context of your heroin charges, you may face enhanced charges and harsher consequences. For example, additional penalties will apply if you are arrested for:

Heroin charges can be very complicated to handle successfully. Complex issues often arise that are better off being litigated by an experienced criminal lawyer. These can include issues such as “constructive possession” or suppression concerns such as inadequate probable cause or an illegal search and seizure. As founding attorney, Will Proetta has handled a wide array of criminal and municipal court cases. Our lawyers have experience in the growing number of heroin charges that face Ocean County. We will work diligently with the County Prosecutor’s Office in securing admittance into Pre-Trial Intervention to avoid a record, obtaining a waiver into Drug Court to avoid state prison or even work out a downgrade and remand. If you would like to learn more about how we can help you build a defense strategy customized to the facts of your case to meet your needs, please contact our office to schedule a free initial consultation with an Ocean County heroin defense lawyer at (848) 238-2100.