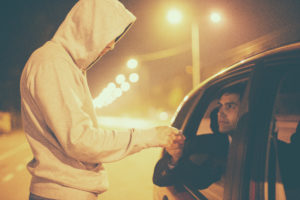 Heroin has increasingly become the popular drug of choice among many recreational opiate drug users. Due to its growing demand in New Jersey and uncanny prevalence in Ocean County, the drug has fueled a very competitive and profitable heroin distribution market. Often, people, especially teenagers and young adults find themselves hooked on prescription painkillers such as Vicodin or Percocet. Unable to maintain the habit once the prescription is used or due to high costs, people then turn to the booming heroin market to meet their need. The State of New Jersey has enacted severe penalties against anyone caught manufacturing, distributing, or selling heroin. If convicted a defendant will face the potential of mandatory incarceration in state prison. This is true even in the case of first-time offenders because the distribution of heroin is an indictable offense. Additional penalties apply when the offense takes place within a School Zone or within 500 feet of a Park or Public Housing.

William Proetta, our founding attorney, has handled a wide array of cases that include numerous heroin distribution and heroin possession charges as well as cocaine distribution, cocaine possession, marijuana distribution, and drug paraphernalia offenses. As an experienced Ocean County criminal defense law firm, our attorneys understand the court system and its operations and procedures and, if eligible, will work with the Ocean County Prosecutor’s Office to secure your admittance into Pre-Trial Intervention in an effort to avoid a criminal record. Other legal options may include Drug Court, which can help to avoid NJ state prison. In some instances we can also pursue a downgrade, which may remand your case to municipal court. We represent clients charged with intent to distribute heroin throughout Ocean County and New Jersey including Brick, Jackson, South Toms River, Lacey, Barnegat Township, Beachwood, Pine Beach, and Berkeley Township. Contact our Toms River office today to speak with an Ocean County heroin distribution lawyer at (848) 238-2100 absolutely free of charge to build a case strategy to meet your needs.

a. [I]t shall be unlawful for any person knowingly or purposely:

b. Any person who violates subsection a. with respect to:

(1) Heroin, or its analog, in a quantity of five ounces or more including any adulterants or dilutants is guilty of a crime of the first degree. The defendant shall be sentenced to a term of imprisonment by the court. The term of imprisonment shall include the imposition of a minimum term which shall be fixed at, or between, one-third and one-half of the sentence imposed, during which the defendant shall be ineligible for parole. A fine of up to $500,000.00 may be imposed;

(2) A substance referred to in paragraph (1) of this subsection, in a quantity of one-half ounce or more but less than five ounces, including any adulterants or dilutants is guilty of a crime of the second degree;

(3) A substance referred to in paragraph (1) of this subsection in a quantity less than one-half ounce including any adulterants or dilutants is guilty of a crime of the third degree, and a fine of up to $75,000.00 may be imposed.

As mentioned above, the degree of a heroin charge is determined primarily by the amount of the substance involved in the alleged offense. The following are the specifications for grading New Jersey heroin distribution offenses:

You may be unaware of this, but Ocean County has been recognized as a top county for heroin trafficking and distribution both on the state level and nationwide. Within New Jersey, the county has been called the epicenter of the opioid epidemic and consistently ranked as one of the leading counties for heroin-related deaths. On a national level, Ocean County has been identified as one of the “critical drug-trafficking regions” in the United States. As such, it is among 16 others counties in 13 states who receive federal assistance from the High Intensity Drug Trafficking Area (HIDTA) program, which provides additional funding and help with law enforcement of heroin-related activities. With the concentrated effort by local, state, and national law enforcement in Ocean County, narcotics investigations involving heroin and resulting charges against individuals and heroin trafficking networks are highly common in the area. As you might expect, heroin prosecutions are extremely aggressive in Ocean County and prosecutors often seek maximum penalties for people accused of selling heroin. This is why it is vital that you enlist an experienced attorney who defends clients charged with intent to distribute and heroin distribution in the county on a regular basis.

Heroin distribution cases, like other major drug charges, are very complicated due to Brimage Guidelines. As a result, suppression issues often arise that should be litigated by an experienced criminal defense attorney. For example, if the state mishandled and improperly tested the drugs found, then there was likely insufficient probable cause for arrest. Other examples may include an illegal search and seizure or an inadmissible confession. At the Law Offices of Proetta & Oliver, our lawyers understand heroin and drug distribution charges. In fact, we devote our entire practice to criminal and municipal court defense for clients including heroin distribution throughout New Jersey and Ocean County including Point Pleasant, Waretown, Plumsted Township, Manchester, Little Egg Harbor, Mantoloking, and Manahawkin. If you would like to discuss your criminal charges with an experienced Ocean County heroin distribution lawyer then contact our office at (848) 238-2100 for a free initial consultation today.