When you drive a car or other motor vehicle in New Jersey, you are not allowed to have an open container of any alcoholic beverage inside the vehicle. 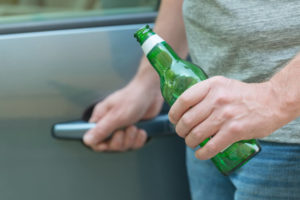 This prohibition on possessing an open container in a car applies when the car is being driven on a public highway. Perhaps surprisingly, the prohibition also applies when the vehicle is in a parking lot or even in your own driveway. Basically, once you are inside your car, you cannot open a beer, liquor bottle, wine bottle, or any other container of alcohol. Anyone found in violation of the law against open containers is subject to a monetary fine. While the penalties for an open container offense may not seem particularly harsh, the truth is that a conviction can cause serious problems for you in the future. If found guilty of an open container violation, you will have the conviction on your driving record forever, and open container charges are often filed along with DWI charges that carry far more severe penalties.

To speak with a talented DWI attorney immediately about ways to defend open container violations and drunk driving charges at the Jersey Shore, contact our Point Pleasant law office at (848) 238-2100.

What are the penalties for a violation of the open container law?

The penalties for a violation of New Jersey’s open container law are set forth in N.J.S.A. 39:4-51b. A person who is ticketed for an open container violation will be subject to a $200 fine if it is their first offense. If a driver or passenger commits a second offense, they will be ordered to either pay a $250 fine or perform 10 days of community service. Any subsequent offenses will result in the imposition of the same penalty: either a $250 fine or 10 days of community service.

If you are ticketed for an open container offense and are later convicted of the charge in municipal court, you will be required to pay a monetary fine. However, the more significant outcomes of an open container conviction often come later:

Can a passenger drink alcohol in a car?

Is an empty bottle of alcohol still an open container offense?

The text of the statute makes it clear that the open container law applies to both “opened’ and “unsealed” alcoholic beverages. Once the original seal of the bottle has been broken, the bottle will be considered “open” for the purposes of the law. Importantly, this means that possession of an empty bottle inside a vehicle will still constitute an open container offense. Beyond that, the open container law can be interpreted quite broadly to also include cups or glasses that contain, or previously contained, alcohol of any kind.

Can a liquor bottle be in the trunk?

There are exceptions to New Jersey’s open container law. While you are almost never allowed to have an open bottle of alcohol in the main seating area of the vehicle, you can have an open or unsealed bottle in the trunk of the vehicle. The idea behind this exception is that the alcoholic beverage is not immediately accessible to anyone inside the car; instead, the beverage is likely in the trunk for the purposes of being transported.

Are there any other exceptions to having open wine, beer, or liquor in a vehicle?

Other exceptions to the open alcoholic container law include:

Facing Open Container Charges when You get Arrested for DWI

It is quite common for law enforcement to make a connection between open container charges and DWI charges. In fact, one of the main reasons that the open container laws were implemented in the first place was to reduce the likelihood of an individual drinking alcohol while operating a car, truck, or other vehicle. An open container charge often happens when a police officer observes a driver swerving or otherwise showing signs of intoxication while driving. When police initiate a traffic stop and pull over the vehicle, they may see the open bottle inside the vehicle and subsequently request that the driver take field sobriety tests and a breathalyzer test.

In many instances, a driver who is found by police to be in possession of an open container of alcohol may also face charges for Driving While Intoxicated (DWI) or Driving Under the Influence (DUI). A conviction on DWI charges is likely to result in severe penalties, including fines, an ignition interlock device, possibly suspension of your driver’s license, and jail is even on the table. In fact, repeated DUI convictions require jail sentences in New Jersey. Beyond that, if your driver’s license is suspended due to a DWI conviction, you may find your life completely upended, particularly if you need to drive in order to perform your job.

Do I need a lawyer for an open container or DWI charge at the Jersey Shore?

The long-lasting consequences of an open container conviction make it absolutely essential that you have a qualified DWI lawyer on your side when charged with either drunk driving or an open container offense in New Jersey. An experienced lawyer can examine the details of your case and help you contest the charges. For example, depending on the circumstances, it may be possible to argue that the evidence of an open container should be deemed inadmissible at trial because it was discovered via an illegal search by police.

You won’t know about the ways to fight your open container and DWI charges without a skilled legal professional who can find errors and issues that may offer your best chance of success. Contact our offices now if you would like to discuss driving with an open container or another DUI related offense in a free consultation. (848) 238-2100. We serve all Jersey Shore towns, including Toms River, Seaside Heights, Brick, Manchester, Berkeley Township, Lacey, Ocean Township, and others throughout Ocean County, New Jersey.