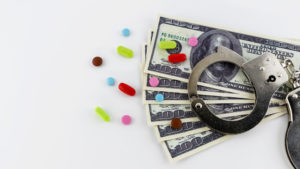 Ocean County is one of the fastest-growing counties in New Jersey, with a population of more than 600,000 residents. Located on the Jersey Shore, Ocean County is a beautiful region that is also a popular area for tourists and other visitors to the state. Unfortunately, the influx of residents and visitors to Ocean County has led to a dramatic increase in criminal activity, including crimes involving drugs. As more and more drugs are sold in Ocean County and throughout South Jersey, the number of drug overdose deaths in the region has become staggering. Law enforcement has responded by cracking down on drug distribution and drug possession offenses, with both large- and small-scale narcotics investigations becoming quite common. If you are the subject of a drug investigation in Ocean County, it is essential to understand what this could this mean for you.

Drug crimes have become a major problem in Ocean County, New Jersey. According to data from the Centers for Disease Control and Prevention (CDC), Ocean County has one of the highest overdose death rates in the entire state, with 43 deaths per 100,000 people. For the purposes of comparison, consider that the drug overdose death rate in New Jersey is 32 deaths per 100,000 people, while the rate in the United States is 21 deaths per 100,000 people. The high frequency of drug overdoses in Ocean County is caused not just by illegal narcotics like heroin and cocaine, but also by legally prescribed drugs such as opioids and painkillers. These drugs, and others, are often obtained illegally in Ocean County, resulting in higher-than-expected overdose numbers. Some of the specific towns and cities that have seen a sharp rise in drug crimes and drug overdoses in recent years include Barnegat, Berkeley Township, Brick, Jackson, Lacey Township, Lakewood, Little Egg Harbor, Manchester, Point Pleasant, Stafford Township, and Toms River.

The Ocean County Narcotics Strike Force often collaborates with outside agencies, including federal, state, and local law enforcement. In fact, many narcotics investigations in Ocean County are multi-agency investigations that involve both the Narcotics Strike Force and local police departments, depending on where the investigation originates and where it leads. If the case involves a drug trafficking network – with suspects traveling across state lines – it is very likely that federal authorities will also be brought into the investigation, and that individuals who are arrested in connection with the investigation could face both New Jersey drug charges and federal drug charges.

If you are being investigated by the Ocean County Narcotics Strike Force, there are certain things you should be aware of in order to ensure that your legal rights are protected. These investigations can take several months, with detectives obtaining as much evidence as possible before making arrests and filing criminal charges. Without sufficient evidence to prove that you were involved in illegal drug trafficking or any other kind of illegal drug activity, the prosecution may not be able to convict you at trial. As such, detectives conducting the investigation will not only try to obtain evidence of drugs in your possession, but they are also likely to search for evidence that can directly connect you to the illegal drug sales or distribution. This may include drug paraphernalia like scales and baggies, cash transactions or bank transfers, emails and text messages, and eyewitness testimony.

Keep in mind that police do not need to find drugs on your person in order to bring drug charges against you. “Possession” can be either actual or constructive in order to justify a criminal charge for a controlled dangerous substance. Essentially, if it can be shown that the drugs were near you and under your control, that may be enough to prove that you legally possessed them. Additionally, you should be aware that police do not necessarily need to prove that you actually sold the drugs, but only that you intended to sell the drugs and the facts and circumstances of the situation support such a contention. When an individual is found in possession of a large quantity of drugs exceeding an amount that indicates personal use, police and prosecutors are allowed to infer that you possessed the drugs for the purpose of selling them at some point. This, coupled with cash in large amounts, drug packaging materials, books or notepads with transactions listed, or other indicators of drug sales can be used against you. It should be noted that any searches or seizures of evidence in a narcotics investigation must be conducted in accordance with the law in order to be admitted in court. On the reverse side of the coin, a search that violates your constitutional rights may offer your defense lawyer a fantastic opportunity for getting key evidence thrown out.

If you are under investigation for a drug crime in Ocean County, or if you have already been arrested and charged with a drug crime in Ocean County, you are probably wondering what happens next. Regardless of what stage the investigation has reached, it is crucial that you speak with a knowledgeable criminal defense attorney as soon as you are able so that law enforcement and prosecutors can be held to appropriate standards, and your rights can be protected throughout the legal process. The truth is that narcotics investigations in Ocean County can involve constitutional violations by law enforcement. For example, when police conduct a search of your property – whether it’s your clothes, your car, or your home – they must follow certain procedures. Generally speaking, police must first obtain a search warrant before setting foot on your property to search for evidence of drug activity. Although warrantless searches are sometimes allowed, there are very specific requirements for these types of searches by police. An experienced attorney can make sure that police do not violate your constitutional rights by conducting an illegal search and seizure, and if an improper search already happened, a lawyer may be able to get the evidence declared inadmissible and suppressed before trial.

In addition to raising a search & seizure challenge on your behalf, a talented criminal trial lawyer might also be able to raise other evidentiary challenges in your Ocean County drug case. For example, evidence handled by police typically needs to be lab tested, which often requires a number of people to transfer the drugs they have been seized. The chain of custody must be documented by authorities at every step and a misstep on their part at any point could result in the drugs being ruled inadmissible in court. Additionally, your attorney might be able to challenge the drug testing procedures. After all, you do not simply want to take the prosecutor’s word that the substances seized by police were, in fact, drugs, nor should you take it as a given that the drugs weighed the amount that police said they did. An experienced lawyer can closely examine the evidence and raise questions if there is a dispute about the type of substance or about the weight of the substance.

On top of that, there may be other defendants in the case or witnesses that simply are not credible, in which case your lawyer can aggressively cross-examine them during litigation and demonstrate that to the jury. Overall, your defense should be uniquely and individually devised to meet the legal standard of each count in the indictment or charging documents, the extent and specifics of the case, the state’s evidence and evidence-gathering techniques, the other players involved, and more. This can be done during trial, pretrial phases, discovery review, and even prior to that when you are initially approached or questioned by law enforcement officials.

If you are under investigation or facing charges for narcotics crimes, getting a seasoned criminal lawyer involved immediately is simply a necessity. Contact us at (848) 238-2100 for a free consultation and to discuss your case with an experienced Ocean County Narcotics Defense Attorney today.