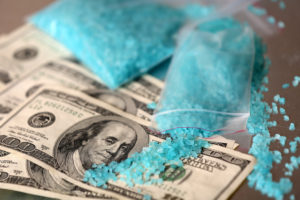 The combined methamphetamine and opioid abuse crisis currently gripping New Jersey has taken hold in Lacey Towsnhip, resulting in numerous charges for drug possession, distribution, and intent to distribute a controlled dangerous substance (CDS). Individuals can be charged with either disorderly persons offenses (similar to misdemeanors in other states) or indictable offenses (similar to felonies outside New Jersey) for possessing certain controlled dangerous substances. People can be further charged with the more serious crime of possession with intent to distribute if officers recover evidence of drug dealing in the lead-up to, or during, the arrest. When your case involves alleged drug distribution in Lacey, it is critical to be aware of the most common crimes that prosecutors will typically file against alleged drug distributors and manufacturers, along with the types of evidence that police and prosecutors will often gather to support those charges.

A conviction for drug distribution in Lacey Township can carry years of prison time and hundreds of thousands of dollars in fines. The experienced Lacey, NJ drug distribution lawyers at Proetta & Oliver are thoroughly prepared to defend you against charges for selling drugs in the township of Lacey or elsewhere in Ocean County. Criminal defense is our sole focus and we have years of knowledge to bring to your case. Whether you are arrested for selling cocaine, heroin, marijuana, or another drug, we are here to answer your questions and explain your legal options. If you would like to speak with an attorney about your Lacey Twp intent to distribute case, call (848) 238-2100 today.

Distributing & Possession of Drugs with Intent to Distribute in Lacey Township

If you reside in house or apartment where drugs are being packaged or distributed, you may potentially be charged with intent to distribute drugs or maintaining a CDS production facility, even if you weren’t involved. If prosecutors conclude that you agreed with one of the drug dealers to either distribute drugs, assist in distributing drugs, or that you had control over the drugs in question, you can face serious punishments. Possession with intent to distribute drugs can be a fourth, third, or even second degree indictable offense in many instances, typically depending on the particular substance and quantity of drugs at issue.

If you face are facing any degree of drug distribution charges in Lacey, or even if you face lesser crimes of possessing a controlled dangerous substance or possessing drug paraphernalia, you should find an experienced criminal defense lawyer who has tried drug cases in Lacey Township and nearby areas. Having a lawyer who practices locally, with an understanding what goes on in local courts, can be a huge asset to your case. Our attorneys have offices located in Ocean County and we have been defending clients charged with drug crimes like yours in this area for years. Contact us today to discuss your charges.

Narcotics Strike Force of the Ocean County Prosecutor’s Office completed an investigation that spanned several months and culminated in five arrests in Lacey Township. Ocean County law enforcement recovered substantial quantities of crystal methamphetamine, oxycodone, and an anxiety drug known as Clonazepam from an apartment complex in Lacey. Crystal meth is a famous central nervous system stimulant that can produce a high lasting for as long as eight hours at a time, with a corresponding crash that can last for up to forty-eight hours. It is one of the most addictive and dangerous drugs in existence. Oxycodone is arguably the flagship drug associated with New Jersey’s opioid crisis (although that title may soon be claimed by the deadly drug Fentanyl). Clonazepam is a benzodiazepine in the same drug family as Xanax; it is commonly prescribed to treat anxiety and operates as a central nervous system depressant, or a “downer,” like Xanax or alcohol. In short, these drugs are all heavy-hitters.

The five people arrested at the Lacey apartment complex were also allegedly found in possession of syringes, glass pipes, straws covered in drug residue, drug packaging paraphernalia like baggies, scales, cutting products, and ledgers. The five people arrested in this drug bust were reportedly charged with possession of methamphetamine, and some were also charged with multiple counts of possession of a controlled dangerous substance with intent to distribute and conspiracy to possess a controlled dangerous substance with intent to distribute. In drug investigations like this one, the scales, cutting agents, baggies, and drug paraphernalia recovered will almost certainly be used to establish an intent to distribute the meth, oxycodone, and clonazepam recovered from the apartment complex.

If you or someone you love has been charged with distributing drugs or possession of CDS with intent to sell in Lacey, New Jersey, it is imperative that you seek counsel from an Ocean County drug distribution lawyer in short order. The attorneys at Proetta & Oliver are available immediately to provide you with a free initial consultation. Please contact our office today.