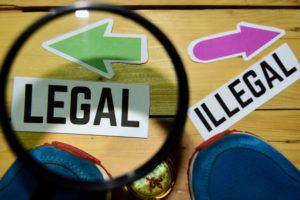 In New Jersey, being charged with a crime means that the State alleges that you committed a violation of the law. As a penalty for violating the law, the legislature has allotted permissible jail time associated with different crimes. The degree of the crime dictates the amount of jail time and the other potential penalties that a person can face if convicted. If your original charges are scheduled to be heard in the Superior Court, Criminal Division in the county in which the offense occurred, this means that you have been charged with an indictable crime (felony). Indictable offenses heard in Superior Court can be first, second, third, or fourth degree crimes and are punishable by state prison sentences. Non-indictable offenses, such as disorderly persons offenses, are usually heard in municipal court. A notice to attend municipal court means that you have been charged with a disorderly persons or petty persons disorderly offense (commonly referred to as misdemeanors in other states). Unlike felony offenses, disorderly persons offenses are punishable by a county jail sentence, not state prison.

If you have questions regarding the degree of the charges you are facing in Ocean County or elsewhere in New Jersey, the dedicated criminal defense lawyers at Proetta & Oliver are here to assist you. Contact our local office in Point Pleasant at (848) 238-2100 for a free consultation about your specific case.

How do I Know if I Have Been Charged with an Indictable Offense in NJ?

Crimes range from first to fourth degree. If you have been charged with a crime and the complaint lists a crime of the fourth degree, third degree, second degree, or first degree, you are being charged with an indictable (felony) offense. Sometimes, there is simply a number 1, 2, 3, or 4 next to the charge, which essentially indicates the same thing.

What are the Possible Penalties for an Indictable Crime in New Jersey?

Depending of the degree of the crime, there are certain sentencing guidelines with ranges of prison time, fines, and other penalties. The potential sentence for each degree of indictable offense in New Jersey is set forth below:

Do I Have to go to Prison for a Felony Charge in NJ?

While each crime exposes a person to a possible state prison term, probation, diversionary programs like Pretrial Intervention or Drug Court, and other options may be available depending on the facts of the specific case. For example, third and fourth degree crimes do not have a presumption of incarceration for first-time offenders, meaning probation or another alternative like PTI can be ordered without state prison. Conversely, first and second degree cases, if convicted, have a presumption of incarceration which means state prison is almost certain (with some exceptions).

The following are some of the most common indictable offenses (felonies) resulting in arrests and criminal charges in New Jersey:

There are countless crimes for which you may face charges in Ocean County, which is why it is essential to consult an experienced attorney who can help you understand all the possible consequences of a plea or conviction for the charges you face and the options that may be available. If you want to obtain the best outcome in your case, having a skilled criminal defense lawyer on your side is absolutely essential. Our attorneys have extensive experience handling criminal matters in Ocean County, including in Toms River, Seaside, Brick, Manchester, Jackson, and Berkeley Township. With numerous successful results in the form of dismissals, PTI enrollment, and negotiated agreements for clients who were otherwise facing lengthy prison sentences, our team is committed to providing top-notch defense representation. If you have been charged with a crime in Ocean County, contact us 24/7 for a free consultation.