What Goes into the Sentence when You have a Criminal Case in NJ? 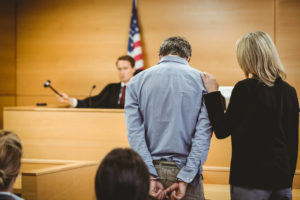 When it comes to pronouncing how much time, if any, a convicted person will spend in jail or prison, the judge presiding over a criminal case has wide latitude but not limitless discretion. Since the law provides a range of sentencing possibilities, including prison time, probation, parole, suspended sentence, community service, restitution, fees, and other conditions, a judge has many options to tailor a sentence to the individual and specific circumstances of each case. There is no one size fits all. But the judge does not decide without input from others. They get input from investigators who conduct a presentence investigation before the sentencing hearing and must operate within the confines of the law.

Before sentencing, of course, a defendant must be convicted. All legal violations that are criminal in nature are either indictable crimes or lesser disorderly persons offenses heard in the municipal court. Indictable offenses are handled in the superior court, where a presentence report is prepared before the judge gives the sentence. The defendant and their attorney read the report before sentencing. In the report, the totality of the circumstances is reviewed, including: the type of crime, the defendant’s history, their family situation, their education, their employment status; and the mental, social, and financial health of the defendant. This includes consideration for any drug or alcohol addiction or prior psychological diagnoses. And if others were involved in the crime, the sentences given to those co-defendants is also considered in the whole picture, along with any input from the victim or victims.

Sentences Should be Tailored to the Individual Defendant and their Case

The rules of sentencing require a sentencing judge to look at the individual, their criminal profile, likelihood of rehabilitation, and needs to get them to be functioning citizens in the general population. If it is a person’s first offense, they may be eligible for the Pre-Trial Intervention (PTI) program that allows a defendant to complete a supervised program rather than go to jail and get the charges dismissed.

For some defendants with little to no criminal history, a judge may find that probation is more appropriate than jail time, especially for a non-violent, lesser infraction, like drug possession (possession of a controlled dangerous substance). Probation, if supervised, requires defendants to meet with a probation officer who monitors the defendant’s progress in following court orders, which may be to get drug and alcohol counseling, drug testing, anger management classes, maintain a job, support a family, keep away from weapons, and not commit crimes. If the terms of probation are not met, a defendant may be forced to face new legal issues for violating the terms of probation. The judge may revoke probation, ending a suspended sentence or sentencing a prison term for the criminal conviction. Unsupervised probation generally does not involve a probation officer, but the defendant must check in with the court on their progress, whether that be completing a PTI program or another rehabilitative program. For either probation type, the judge cannot order a probation period longer than what the defendant would have received for the crime, no longer than five years.

Judges have the discretion to sentence a convicted offender to probation rather than prison or in addition to prison, called a split sentence, if the crimes do not involve aggravated assault, kidnapping or crimes against children. A judge may also order a suspended sentence, which means the sentence is delayed for a time, either for the defendant to fulfill a condition, such as work, counseling or payment of fines or restitution, meaning the sentence is not served in jail or prison. A split sentence means part of the sentence is suspended after a portion of the prison sentence is served. So, a five-year sentence may be split by serving two years in prison, after which the convicted individual serves three years’ probation.

A court can also order a conditional or unconditional suspended sentence, meaning the defendant does not serve their sentence immediately or does not serve it, so long as they satisfy the court’s conditions. However, some crimes bar the judge from giving a suspended sentence, and all of these defense-friendly sentences can be revoked if the defendant violates terms of the sentence.

Sentencing in Accordance with a Plea Deal

Barring probation, a defendant’s sentence may differ depending on whether a jury convicted them at trial or the defendant entered a plea bargain at a pretrial hearing before trial. Though a routine practice in most courts, plea bargaining is not sanctioned by law, and a judge must approve the bargain for it to become the law of the case. A bargain consists of entering a plea of guilty in exchange for a lesser sentence. So, if a person is facing several indictable criminal charges and a few minor offenses, the prosecuting attorney and defendant or defendant’s counsel may agree to drop the minor offenses or lower the sentencing on the criminal charges or both. In that way, the prosecutor does not have to spend time and resources to put on a trial to prove each charge with witnesses, evidence, and limited court time.

The judge, however, still has discretion to give another sentence more in line with the facts of the case and the sentencing aims of rehabilitation and public safety. Moreover, the plea bargain must be entered into with the full knowledge and voluntary consent of the defendant. So, a judge can examine the facts and pronounce a harsher or lighter sentence than the one bargained for between the prosecution and defense. And, as with all pleas and sentencing, the consequences of the plea and sentencing must be explained by the judge, including the No Early Release Act terms, the requirements for sex offenders to register and associated consequences, consecutive sentences, mandatory drunk driving jail time, and probation violations.

The Graves Act limits a judge’s sentencing discretion even further, denying those convicted of certain firearms violations from parole eligibility without serving a minimum sentence. They must serve the entire term mandated by the Graves Act before even being considered for parole. Violations, such as unlawfully possessing a firearm, sawed-off shotgun, or firearm that has been modified or tampered with, fall under the Graves Act. Having a gun while committing a crime, illegally transporting arms, and possessing a gun when you have a prior gun violation conviction on your record also qualifies for the Graves Act sentencing requirements.

In addition, public officials who abuse their office are also subject to mandatory minimum sentences. New Jersey’s No Early Release Act requires those convicted for violent offenses and other select crimes serve 85% of their prison term. This differs from what occurred before NERA, when a convicted robber might spend three years out of a ten-year sentence when work and good behavior credits were taken into consideration. After NERA, the same sentence would be closer to eight years. However, a recent Attorney General directive allows prosecutors to waive mandatory minimums for some non-violent offenders.

Even if a defendant’s crimes fall neither under NERA or the Graves Act, they may still serve a long prison sentence. When a defendant is charged with and convicted of multiple crimes, the sentencing judge may issue a sentence for each conviction, running consecutively, to a total number of years in prison and fines for all crimes. Concurrent sentences, however, run all at once, with lesser crime sentences absorbed into longer sentences. So, for example, if an individual is convicted of kidnapping, with a prison term of thirty years, and criminal restraint, with a prison term of three years, serving the thirty years also satisfies the three-year prison term. Both crimes are based on holding a person against their will. A judge might sentence concurrent sentences for compassionate reasons, especially if the same set of behaviors amount to different crimes. Judges know that prosecutors charge multiple crimes in a criminal complaint as leverage for negotiations.

Do I Need a Lawyer if I’m Charged with a Crime in Ocean County?

It may seem that the judge has your fate in their hands, but having a talented criminal defense lawyer representing you can go a long way toward getting a lesser sentence, the one that will help you move beyond your criminal conviction and onto the next phase of your life. With the help of a good attorney to negotiate the terms of a plea bargain, help you present your best self at a presentence interview, present the judge with all of the relevant sentencing information that puts you in a favorable light, and aggressively advocate for you at a sentencing hearing, you can fight for a fair sentence. In addition to that, you may be able to avoid sentencing altogether by determining, preparing, and carrying out a successful defense. Our Ocean County criminal attorneys at Proetta & Oliver are prepared to work tirelessly for your defense. Contact our office in Point Pleasant for a free consultation and to speak with an attorney today. (848) 238-2100.