Accused Being Drunk in Public at the Jersey Shore? 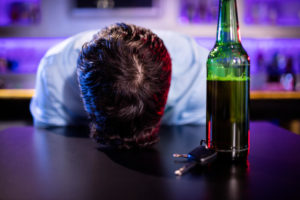 People often come to us asking whether public drunkenness is a crime in New Jersey.  The simple answer is no, it is not a crime to be intoxicated in public. Gathering, having a good time, and drinking is not a criminal offense in and of itself under the NJ Criminal Code. However, you can be given a violation of a town ordinance or charged with the petty disorderly persons offense of disorderly conduct under N.J.S.A. 2C:33-2, for drunken behavior that causes some disruption.  The penalties for these offenses vary and can include just fines and penalties, but they also permit time in jail. What legal issue ensues as a result being drunk in public depends on what specific criminal charge or municipal ordinance violation you are facing. Likewise, the penalties will depend on the outcome of your case, how it is handled in court, and the punishments authorized under the specific section of town or state law.

Often, when conjuring images of public drunkenness, many of us instantly think of young twenty-somethings being drunk and acting silly at the Jersey Shore. After all, the shore is a perfect place to soak in the sun, sip spirits, and just let go and be carefree.  But as we all know, not all plans to relax and enjoy the company of friends goes as we might have hoped.  One drink leads to two, which leads to too many, and the excitement of the night takes hold of someone in the group.  The person may begin to yell, scream, shout, walk into the middle of the road, argue with police officers, bang on nearby cars, urinate on the sidewalk, or become a danger or public disturbance in some way. When the attention is called to the less than perfect behavior, the police may step in to stop it and ultimately attempt to restore peace to the public.  Take note, however, that being drunk is not the issue nor the crime.  The problematic behavior displayed as a result of over-imbibing is the actual offense.

The majority of offenses associated with public drunkenness are more appropriately categorized as disorderly conduct.  The criminal offense of disorderly conduct simply refers to any conduct committed in public that is reasonably alarming to other people who witness the display of erratic behavior. Additionally, it must be shown that while in public, the actor had no legitimate purpose when behaving the way they did.  For something as simple as cursing or using offensive or course language, fighting, or any other alarming conduct, the municipal court judge can sentence you to as much as 30 days in jail as well as a $500 fine. In the scheme of the criminal system, petty disorderly persons offenses are the lowest level offenses. They can still pack a punch to unsuspecting people who are charged, especially considering that a petty disorderly persons offense will result in a criminal record. A charge for disorderly conduct for drunken disruptive behavior is universally permitted throughout the state of New Jersey.

In addition, for those who appear to be under the influence of drugs (CDS), they may face a disorderly persons offense and punishment in accordance with N.J.S.A. 2C:35-10(b).

Aside from disorderly conduct, you can be charged with a disorderly persons offense for consuming alcohol in public while being under the age of 21.  For an underage drinking charge to stick, the state need only prove that you were in public, that you were under 21, and that you drank alcohol. Even possessing alcohol underage is an offense under this statute. For this offense, the maximum punishment is 18o days in jail, a $1,000 fine, and $125 in penalties.

In addition to criminal laws that apply throughout New Jersey, towns enact their own laws that must be abided by while in the town.  These local laws are called municipal ordinances. Many towns have ordinances against drinking in public. You can be charged with a violation of a municipal ordinance for behavior associated with alcohol in public. For instance, in the Borough of Seaside Heights, an ordinance violation may be issued to anyone accused of drinking in public or in a motor vehicle. This refers to consuming alcohol in various locations, like roads, sidewalks, playgrounds, public parks, and on other property in the town other than those licensed to sell and allow alcohol consumption.  It is also a violation of a Seaside Heights ordinance to consume alcohol as a minor in public.

All ordinance violations have penalties associated therewith, as set forth in their municipal code.  For an open container violation, a person who violates this ordinance in Seaside Heights faces 90 days in jail, fines ranging from $100 to $1,200, and community service as well.  The ordinance is considered a less egregious offense than disorderly conduct but can be decidedly worse in terms of the possible punishment.  Other shore towns and municipalities have similar ordinances prohibiting drunken behavior and other activities involving alcohol.

For those charged with disorderly conduct or other offenses related to public intoxication, the court appearances alone can be frightening and an inconvenience to the accused. You may be required to attend several times without an amicable resolution. This often means you must miss work, school, and fund the travel expenses needed to get back and forth to court. Pressure by the court may put on you to plead or otherwise move the case forward against your best interests. In fact, if you are a college student who only visited the Jersey Shore for the summer, your semester plans may be interrupted by the many required court appearances.

At the law office of Proetta & Oliver, we know the inconveniences all too well and have helped many people resolve their case with little to no disruption to their lives. Whether you have been accused of a criminal infraction or an ordinance violation, our criminal defense lawyers fight to get the best possible results and to put you in the best position. We can often secure some outcome avoiding a criminal record, enabling you to gain a stronger footing for your future. And in all cases, we seek to get the charges dismissed through all legal arguments and available avenues that apply. In some cases, we can even accomplish this with a plea by affidavit. This document allows us to handle the case for you and with your permission without you ever having to be present. In these cases, we have pre-arranged deals that do not require jail, permit downgraded offenses, and minimize the risks associated with a trial or conviction.

If you need assistance or answers regarding a public drinking case in Point Pleasant, Seaside Heights, Ocean Township, Mantoloking, Brick, Beach Haven, Lavallette, or another town in Ocean County, call our local law office at (848) 238-2100 today. Free consultations are available 24/7.