Vape Use, Sales may get You in Trouble in New Jersey 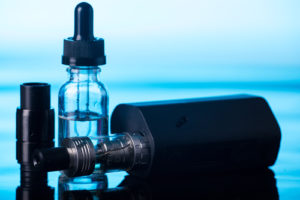 The CDC has reported that the number of high school students using e-cigarettes and other tobacco products has increased dramatically in the past year. New Jersey, like other states, is seeing a major spike in vape pens and associated criminal charges. Believe it or not, you can face serious penalties for selling tobacco and alcohol products, including Juuls and other vapes, to persons under the age of 21 in New Jersey. Young people can also be charged as juveniles or adults for drug residue found in electronic cigarettes. You can learn more about drug charges in New Jersey by visiting our page on NJ Drug Crimes.

How Common is Vaping in New Jersey?

The Centers for Disease Control’s annual National Youth Tobacco Survey, most recently released in February 2019, estimated that the increase in underage tobacco use—through vaping and similar tobacco delivery methods—has exceeded 38% year over year. Vapes accounted for much of that increase. Nearly 21% of all high schoolers—including many high schoolers in New Jersey—vaped, an increase from approximately 12% of high school students in 2017. These numbers are so striking that New Jersey Surgeon General Jerome Adams has declared an epidemic of youth e-cigarette use in the state.

The federal Food and Drug Administration begun focusing its efforts on limiting illegal tobacco sales to minors. The FDA plans to issue new restrictions on certain flavored nicotine products, restricting their sale to stores that carry age-restrictions—vape and smoke shops being an obvious example. According to FDA Commissioner Scott Gottlieb, the agency may propose such regulations as early as Spring 2019.

Even more importantly for New Jersey residents who may be considering selling or procuring nicotine products for teens in New Jersey, the FDA is examining additional civil and criminal enforcement tools to target underage tobacco sales. Given the focus on this issue by the New Jersey Surgeon General and the federal government, it is likely that existing New Jersey laws in this area will be enforced vigorously.

New Jersey law already prohibits the sale of tobacco products to persons under age 21. This includes the sales of vapes to teens. NJ Rev Stat § 2A :170-51.4 states that the distribution of tobacco and electronic smoking devices to persons under the age of 21 is prohibited, and the statute further provides for civil penalties to be imposed on violators. The sale of vape cartridges falls within this statute’s prohibited conduct, along with the sale of tobacco products by agents or employees of businesses.

Violations of NJ Rev Stat § 2A :170-51.4 carry with them a $250 fine for a first-time violation, $500 for a second violation, and $1,000 for a third and each subsequent violation. Retail establishments that commit multiple violations can also lose their state licenses.

NJ Rev Stat § 2C:33-13.1 prohibits the sale of electronic smoking devices and cigarettes to persons under the age of 21. The statute provides that those who make such a sale are guilty of a petty disorderly persons offense. Any penalties imposed by your local jurisdiction for such a petty disorderly persons offenses are in addition to penalties imposed under NJ Rev Stat § 2A :170-51.4, the civil statute discussed above.

It is also illegal to sell or provide alcohol to people under the age of 21. Selling or making liquor available to an underage person in New Jersey can get you charged with a crime in violation of N.J.S.A. 2C:33-17. This is a disorderly persons offense that will appear on your criminal record if convicted.

That said, there are defenses to the underage sales statutes. If the underage buyer presented a fake ID indicating that they were of age, if they appeared to be over the legal age, and if the sale was made in good faith, you may have what is called an “affirmative defense” to the criminal or civil action brought against you.

Arrested for a Vape-Related Criminal Offense in Ocean County?

If you or your child has been charged with a crime involving an electronic cigarette, you are not alone. With the increase in vaping has come aggressive law enforcement against people who carry drugs inside of these cigarettes, as well as individuals who (accidentally or not) sell to those underage. Our local Ocean County criminal defense law firm defends people in this predicament throughout the area, including in Point Pleasant, Seaside Heights, Long Beach Twp, Lacey, Manchester, and Brick, NJ. For a free consultation about your vape related criminal charge, contact us at (848) 238-2100.

For additional information regarding Electronic Cigarette use, access the following article: CDC blames spike in teen tobacco use on vaping, popularity of Juul