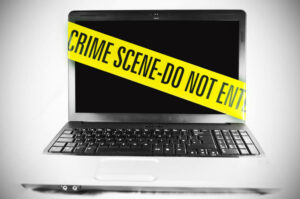 The internet is like the wild west centuries ago. It feels like there are no boundaries, as anyone can post anything on the internet, like advertising, business promotions, educational courses, social sites, dating places, personal banking, and just about everything you can do in person. With just about everyone on the internet, it comes as no surprise that the internet is rife with crime. Sometimes called computer or cybercrime, fraud, theft, pornography, stalking, and even assault happen on computers. In sum, internet crime is a term that encompasses a wide range of deceptive and destructive actions. Consider, for example, that most people know that they need virus protection for their computers. Viruses are human-engineered and disseminated, and their purpose is to steal or destroy computer systems and data.

If you are facing serious allegations and the harsh penalties for computer crimes, our Ocean County criminal defense firm can help. We are poised to investigate and attack the prosecution’s case against you, whether you are facing a single criminal charge for computer criminal activity, or multiple charges for identity theft, stealing personal identifying information, theft of services, harassment, endangering the welfare of a child, and credit card theft and fraud. Our legal team has decades of combined experience handling all aspects of criminal investigations, procedures, and litigation in courts throughout the Jersey Shore, such as Manchester, Berkeley, Brick, Toms River, Point Pleasant, Seaside Heights, Long Beach Island, and Jackson. Contact (848) 238-2100 to discuss your internet and computer criminal charges and defense options today.

If charged and convicted for accessing, stealing, or damaging someone’s data or computer system in New Jersey, a person may end up in prison for 5 years and pay $15,000.00 in fines. Accessing another’s computer data, storage, programs, software, equipment, system, or network for any reason is a third degree crime. However, it could be a second degree crime. Those who corrupt or destroy computer data, storage, programs, software, equipment, system, or networks; impede another’s access to the internet; defraud another of money or property worth more than $5,000.00, or hack another’s medical or governmental records or data may be imprisoned for up to 10 years and pay $150,000.00 in fines.

And it makes a difference if the hacker intentionally destroys or damages data and other stored information on another’s computer or recklessly does it. For example, if a young teenage hacker is trying out their computer hacking skills and accesses their neighbor’s computer system, unintentionally deleting information from the data backup system, they may be charged with a fourth degree computer crime. And if the teenager accessed the neighbor’s computer system, programs, and data, all of which is worth less than $1,000.00, the teenager may be cleared of any wrongdoing if they did not reveal or share the information they obtained.

The big-time hackers, though, may go to prison for up to 20 years for a major hack. It is a first degree crime to access a computer system, like those that provide utilities to more than ten structures or those that service public transportation and communication, to disrupt the services. Clearly, disruption of essential services for two hours or more may endanger lives. If a hacker does endanger lives or causes more than $250,000.00 of damages, they are in for a long prison stay. First degree computer crime sentences and even lower-grade computer crimes that victimize a governmental agency come with mandatory minimums of one-third to one-half the prison term before the inmate is eligible for parole.

What Else is Considered a Computer Crime in New Jersey

If a hacker uses personal information like credit card information, social security numbers, addresses, or other identifying information, they may be guilty of computer crimes, credit card fraud, and/or identity theft if they use the information to obtain a credit card, car loan or anything else of value in another’s name. In essence, someone is impersonating someone else to benefit themself and injure another. And impersonating another for benefit does not have to occur on the internet. A person can walk into a car dealership with a false driver’s license, social security number, and bank statements of someone else. As long as the accused obtained the information online, they can commit internet identity theft, among other crimes. The punishment ranges from a disorderly persons offense with six months in jail plus restitution, to a second degree crime, depending on the amount defrauded and the number of people defrauded.

Other than financial internet crimes, interpersonal or relationship crimes can occur online. For example, cyberstalking consists of targeting a person with a consistent course of threatening behavior. A person who commits cyberstalking intentionally places another person in fear for their life, whether emailing, texting, instant messaging, calling, or in-person threats, at least twice to qualify as cyberstalking. Usually a fourth degree crime, cyberstalking may rise to a third degree crime if the person accused has a history of stalking the victim or others, stalks someone from prison, or violates parole or is in violation of a restraining order.

Downloading, distributing, or viewing child pornography online also falls under the realm of serious computer crimes. If the person films or otherwise allows a child to participate in sexual activity that may be reproduced and disseminated online, they run the risk of being charged and sentenced for a second degree crime conviction. Besides the ten years in prison and fine of $350,000.00, the convicted sex offender must register with the state under Megan’s Law and be in the sex offender database. If you have to register as a sex offender for internet pornography, you must report to the state indefinitely unless you convince a court that they should no longer be registered, a tough fight best left to a sex crimes attorney experienced in Removal from Megan’s Law.

Moreover, Ttird degree charges for child pornography apply to those who distribute or disseminate such content involving minors over the internet. Likewise, possessing child pornography or viewing it on your computer is also a crime, this time of the fourth degree, which carries up to $10,000 in fines and 18 months of prison time.

Worse yet, separate computer crimes come with separate sentences. A judge will not merge them, and the law attaches separate computer crime prevention fines, in addition to the fines for committing a first, second, third or fourth degree crime, for each violation. For example, an accused can be charged for computer crimes for hacking into someone’s computer system. If they destroy or damage any data, equipment, or other computer-related information, hardware, or software, that can be a separate charge. And then disclosing that information to others is yet another crime called wrongful access disclosure, which carries a mandatory minimum sentence also (N.J.S.A. 2C:20-31). Thus, for the same act, a person accused of computer crimes can face three separate charges with cumulative prison terms, the number of years depending on the specifics of the crime (ie. whether the defendant meant to destroy or reveal data or mistakenly did so). Intentional acts bridge the third degree to second-degree charges, reflecting the legislature’s clear intent to discourage computer crimes.

The legislature’s harsh punishment for internet crime could leave you with lifelong problems. As such, you should seek legal guidance and zealous defense counsel from a dedicated criminal defense attorney handling computer crimes charges if you are among the many accused in Ocean County and New Jersey every year. Although the state throws the proverbial book at you for an internet crime, this does not mean you won’t be able to pare down or get the charges dropped through legal motions, plea bargaining, Pre-Trial Intervention, or expert trial performance. Contact a local criminal defense attorney at our Point Pleasant office today for a free consultation regarding your computer and internet criminal case. You can reach us day and night at (848) 238-2100 for assistance.