Can I be Charged for Refusing to Leave a Bar in New Jersey? 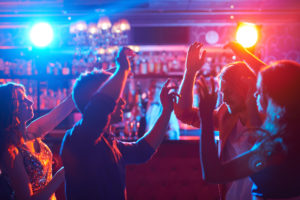 You were at a bar, had one drink too many—or more, and were asked to leave, but refused. In the light of day, you may regret some of those choices, particularly if you have been charged with one or more criminal offenses. Hopefully, you’re reading this article before you find yourself in that situation and have an opportunity to learn about some of the potential criminal charges that can stem from your refusal to leave a bar. If you have been charged with a crime at a bar in Ocean County, NJ, our experienced criminal defense lawyers help clients in your situation in Point Pleasant, Seaside Heights, Lavallette, Toms River, Manahawkin, Brick, and other Jersey Shore towns throughout the Ocean County area. We know you’re probably stressed and overwhelmed by a criminal charge such as disorderly conduct, drug possession, resisting arrest, possession of MDMA, underage drinking, or simple assault, and we can help you prevent this momentary lapse from affecting the rest of your life.

The skilled New Jersey criminal defense attorneys at Proetta & Oliver are fully equipped to defend you against criminal charges at Jersey Shore bars, including:

Trespassing at Bar in Point Pleasant

The most obvious charge that can result from refusing to leave a bar is trespassing. In New Jersey, you are guilty of criminal trespass if you remain in a place you are not privileged to be in after being given notice against trespass—such as refusing to leave a privately-owned bar, after you have been asked to leave. Trespassing is a disorderly persons offense that carries up to 30 days of imprisonment and fines of up to $500.

When alcohol is involved, poor decisions can quickly cascade and before you know it, you have not only refused to leave a bar, but you have also resisted lawful arrest. Resisting arrest is a serious offense in New Jersey and if you are found guilty, you will be convicted of a disorderly persons offense and face up to six months in jail—or more if you actually run away from the police, in which case the crime becomes a fourth degree indictable offense. Depending on the degree of resisting arrest charges, you may face time in the Ocean County Jail or New Jersey State Prison.

Simple Assault of a Bouncer in Seaside NJ

Perhaps, you refused to leave a bar and then things started to get physical. Suddenly, you find yourself facing simple assault charges stemming from allegations that you hit or shoved a bouncer. In New Jersey, you can be charged with simple assault if attempt to cause, or recklessly, knowingly, or purposely cause bodily injury to another person. It is usually a disorderly persons offense, unless aggravating factors exist like use of a weapon or serious injury to the victim occurs.

Notably, if you are accused of assaulting a police officer who is attempting to remove you from a bar, this is considered aggravated assault which is a felony in New Jersey. Even if the officer sustains minor injury, any assault on a law enforcement official is elevated to aggravated assault under NJ law.

Charged at a Bar in Point Pleasant, NJ

The above list of potential charges stemming from refusing to leave a bar is not exhaustive and you might be charged with additional offenses. Do not face the possibility of imprisonment and significant fines alone—contact our law firm today at (848) 238-2100 and get a free consultation about your case. You may have one or more defenses available and our lawyers will work hard to advocate for your defense.