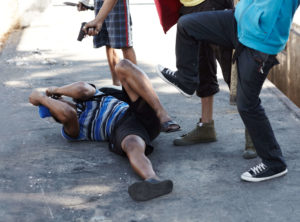 Aggravated Assault is an indictable offense with serious consequences. If proven guilty, defendants can be sentenced to significant state prison time. Aggravated assault charges arise out of different types of events. These can include assault with a deadly weapon, assault on law enforcement, or assault on a victim who, as a result, suffers significant injury such as a laceration or broken nose. When aggressors engage in this type of behavior, lesser charges such as Simple Assault or Resisting Arrest are often upgraded to indictable aggravated assault charges. (For a better understanding of the grading of NJ criminal offenses, click here)  Due to the fact that aggravated assault is classified as an indictable offense, the hearing will take place in Ocean County Superior Court in Toms River. In addition to the severity of the charge, aggravated assault can also be the basis for a Final Restraining Order under the Domestic Violence Act.

Need a Lawyer for an Aggravated Assault Charge in Manchester NJ

If you have unfortunately found yourself being charged with aggravated assault it is important that you avail yourself to an experienced and skilled Ocean County aggravated assault attorney, one that has an understanding of the inner workings of the court system. The attorneys at Proetta & Oliver have successfully handled a wide array of assaultive types of cases throughout their careers including countless aggravated assault charges. Our firm represent clients who have been charged with aggravated assault in courts throughout Ocean County, New Jersey including courts in Toms River, Ocean Gate, Manchester, Forked River, Barnegat Township, Manahawkin, Point Pleasant, Mantaloking, and Brick. Let us put our knowledge and experience to work for you, contact us today at (848) 238-2100 for a free initial consultation.

Aggravated Assault is always handled at the Superior Court because it is an indictable offense. However, it can range in degree of crime depending upon various factors. These can include the extent of injury that the victim has suffered, the age of the victim, the existence and use of a weapon, or if a police officer was injured. As you will see below, the degree of the charge will dictate the potential penalties that one faces if convicted of aggravated assault.

The three different degrees of aggravated assault, addressed in section N.J.S.A. 2C:12-1b of the New Jersey Criminal Code, are as follows:

4th Degree Aggravated Assault – It is a crime of the fourth degree to commit aggravated assault by recklessly causing injury to someone with a weapon. Moreover, aggravated assault to the fourth degree when an individual recklessly points a gun in the direction of another person even if it is unloaded. If one is found guilty of a fourth degree felony, then he or she may be sentenced to state prison for up 18 months, serve a period of probation, incur thousands of dollars in fines, and a be subject to a permanent criminal record.

3rd Degree Aggravated Assault – Aggravated assault to the third degree occurs when one causes or attempts to cause significant bodily injury to another, even if it is done recklessly. The operating element here is not intent, but rather the existence of significant injury. Additionally, it is automatically a third degree aggravated assault crime when a weapon is brandished. For example, if an individual exhibits or points a firearm at another, and causes bodily injury to another with a “deadly weapon” or even use an imitation firearm to intimidate a police officer, then the individual, if guilty, is subject to the penalties of a third degree felony, which carries 3-5 years in state prison and a permanent criminal record.

2nd Degree Aggravated Assault – Under rare circumstances, aggravated assault will be a felony of the second degree if one causes or attempts to cause serious bodily injury to another under circumstances manifesting extreme indifference to the value of human life. The victim of such a crime will suffer an injury such as a broken bone or loss of a limb. Additional circumstances that often give rise to second degree aggravated assault charges occur when the defendant injures someone while in the process of fleeing or eluding the police or when serious injuries are caused by a drunk driver. The latter is referred to as assault by auto. A second-degree felony is punishable by 5 – 10 years in state prison. There is also a presumption of mandatory incarceration in such cases. This is true even in the cases of  first time offenders possessing no criminal record.

Where Do I Go To Court for an Aggravated Assault Charge in Ocean County? 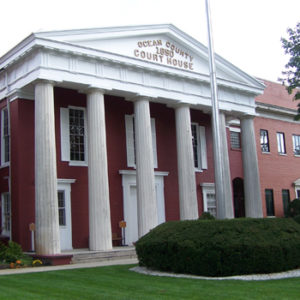 As touched upon above, regardless of the underlying degree, all aggravated assault charges are classified as indictable offenses, which is New Jersey’s version of a felony. Since aggravated assault is a felony offense, the charges must be transferred to the Superior Court in the County where the incident occurred. So, if the incident in question happened in Brick, New Jersey then the case must be transferred to the Ocean County Superior Court, which is located at 12o Hooper Avenue in Toms River for disposition. If the individual is also charged with lesser charges like harassment, simple assault, disorderly conduct or obstruction of the administration of justice, those charges as well must be transferred to the Ocean County Superior Court for disposition. With that being said, in certain circumstances, an experienced criminal defense attorney can seek to convince the prosecution at the individuals Pre-Indictment Conference to remand the felony assault charges back to the local municipal court. If this is to occur, the felony offenses will automatically be downgraded to a misdemeanor (disorderly persons offense), most likely simple assault.

Aggravated assault is a very serious criminal offense with the power to severely and negatively alter your life. Therefore, it is vital that you seek out and retain an experienced Ocean County criminal defense lawyer who will aggressively fight for your rights and, if prudent, attempt to negotiate with the prosecutor for a diminished charges or admittance into a diversion program such as Pre-Trial Intervention. The attorneys at Proetta & Oliver have extensive experience in handling aggravated assault offenses in Ocean County and know what it takes to properly defend and beat these charges. To speak with us about your case and develop a strategy customized to your facts and needs, contact our conveniently located in Toms River by calling (848) 238-2100.